India is enjoying an economic boom, with near double digit growth. But southern India has rocketed far ahead of much of the rest of the country on virtually every score of people here earn more money, are better educated, live longer lives and have fewer children.

A crucial factor is the collapse of the caste system over the last half century, a factor that undergirds many of the other reasons that the south has prospered , more stable governments, better infrastructure and a geographic position that gives it closer connections to the global economy.

India’s constitution abolished caste, the social hierarchy that has ordered Indian life for thousand of years and instituted a system of quotas to help those at the bottom rise up. But caste division persists nonetheless, with upper caste dominating many spheres of life.

While in the south lower caste members concentrated on economic development and education as a route to prosperity, in the north the chief aim of the upper caste based groups has been political power and its spoils.

Academics and analysts have closely watched the rise of lower caste for clues about the role caste barriers play in holding back India’s economic progress.

The lower caste Tamil Nadu Nadars have created a business associations that provide entrepreneurs with credit they could not get from banks. They started charities to pay for education for poor children. They built their own temples and marriage halls to avoid upper caste discrimination.

As a result, when independence came the southern lower castes, who had already broken the upper caste monopoly on economic power, enjoyed political power almost right from the start.

Tamil Nadu set aside 69 percent of government jobs and seats in higher education for the downtrodden castes, which helped rapidly move lower caste people into the mainstream.

When India’s economy liberalized in 1990’s, the south was far more prepared to take advantage of globalization, the south was ready, said Samuel Paul of the Public Affairs Center, a research institution that has looked closely at the growing discrepancy in economic social status between the lower caste and the upper caste. 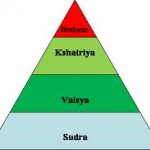