Lady Gaga, shedding her controversial meat dress recently for a white blouse and black suit in which she has been badly criticized by animal rights activist, has addressed US senators in a video on YouTube, urging them to repeal the law known as “don’t ask, don’t tell”.

The pop diva also asked fans to call their senators, before picking up for her mobile and dialing two New York senators.

US Defense Secretary Robert Gates in February announced plans to repeal the “don’t ask, don’t tell” and established a commission to study the best way to implement a new policy. That evaluation was expected to be completed by December 1.

The “don’t ask, don’t tell” policy instituted under former president Bill Clinton permitted gays to serve in the US military provided they kept their sexual preference secret. But more than 10,000 men and women have been expelled since the policy went into effect once their sexuality was revealed, according to gay rights groups.

Lady Gaga got serious by speaking out against a 17 year old law that prohibits homosexuals from serving openly in the US military. “I am here to be a voice for my generation, not the generation of the senators who are voting, but for the youth of this country, the generation who is affected by this law and whose children will be affected,” she said.

The Senate is considering to the issue next week as part of the military spending bill. A judge last week ruled the policy was unconstitutional, but it remains in place pending a government appeal even as the Obama administration is preparing to revoke the policy. 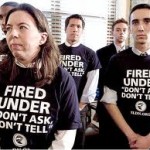