Gold has become a fad as ingredient in skin care products. Cosmetics executives say that gold is anti-aging, anti inflammatory and anti-acne.

People who sell creams with gold flecks talk about the ability of those flecks to warm the skin and make it conducive to other ingredient.

People who sell gold can confer benefits only when it is broken down tiny enough to penetrate the skin in the form of microscopic materials suspended in a liquid mixture known as colloid.

But is it true that gold has therapeutic effect on skin care? Dermatologists say that gold cannot help you, but it absolutely can hurt you, causing inflammatory reactions like contact dermatitis.

Dr. Judith Hellman, a dermatologist in New York City, did research into gold face creams. “At best they do nothing, and at worst, they can give you irritations of the skin,” she said.

Dr. Jeannette Graf, a dermatologist in Great Neck, a suburb of New York said, that she had done “intensive medical searches on this very ingredient” and found that “there are absolutely no scientific studies that show that gold has any effect in firming or revitalizing the skin nor that it reduces wrinkles or gives skin a plumped, golden glow.”

But what Dr.Graf had found out that gold was named “allergen of the year” in 2001 by the American Contact Dermatitis Society.

However, the skin care company has countered by saying that they have proprietary research showing the benefits of gold. Holly Gernovese, vice president of La Praire said that the company’s scientists had found a way to use gold that is valuable to the skin.

“Colloidal gold is the best option when you’re using gold,” said Laura De Luisa La Rocca, founder of La Rocca Skincare. “I’ve been using it for 2 years and it definitely change my skin. It has tightened it, it has toned it, many lives have faded probably 40 percent.”

Cosmetic makers cite the use of gold in medicine, where it is given to patients with rheumatoid arthritis and has been used experimentally as a possible cancer treatment.

Mustafa El Sayed, a professor at the Georgia Institute of Technology said it was ridiculous to think that gold could fight wrinkles. “The way it takes care of cancer, the nano particles goes only to cancer cells, none of the healthy cells,” he said. 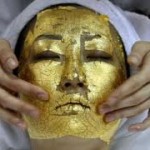