Billionaire Donald Trump in recent months, had been flirting with a presidential bid even traveling to early primary states like New Hampshire.

Last month, he went through the headlines when he questioned whether President Barack Obama was born in the US, that hinted speculations that he will be running for the US presidency in 2012.

But lately, the real estate mogul declared that he will not run for the US presidency in 2012, saying that he is not ready to leave the private sector.

In a statement on Monday, Mr Trump said that through his ‘unofficial’ campaigning, he had come to realize that ‘running for public office cannot be done halfheartedly’.

Mr.Trump, who hosts the reality television programme Celebrity Apprentice, made the declaration as the NBC television network rolled out its line-up of forthcoming shows.

Prior to the declaration, NBC said it would bring back the programme with a different host if Mr.Trump ran for president.

Had he run, Trump would have had to make significant disclosures about his financial interests and undergo scrutiny of his business activities, and analysts had suggested that prospect could dissuade a candidacy.

And Mr. Trump’s tumultuous personal life, played out in past decades across the pages of New York’s tabloid newspapers, his ideological inconsistency, his reputation as a showman and his lack of political experience could have proven problematic for serious minded Republican primary voters. 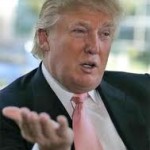