Just as Kate Middleton and Prince William, are off on their honeymoon at an exclusive island in the Seychelles.

Pippa Middleton, 27, has continued to make waves as she stole the attention again of the world from her sister Kate.

Now she is spotted again in Madrid with ex-boyfriend George Percy, who was photographed in the city’s Retiro Park, rowing a boat while Pippa was all smiles as she sat back and relaxed.

Percy, 26, is the son of the Duke of Northumberland, one of the richest men in Britain. It was reported that he and Middleton dated back in their college days at Edinburgh University.

Earlier during her stay in Madrid, Pippa and her pals were spotted partying at hotspot Fortuna nightclub, sightseeing and sipping wine at a cafe.

Pippa Middleton’s current boyfriend, Alex Loudon, is the son of a retired financier. Alex was her date for the royal wedding, which put Pippa in the spotlight.

Loudon attended the prestigious schools Eton and the London Business School and has family ties to both an earl and the Dutch monarchy. 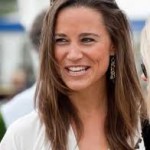