Pomegranate juice has surprising attributes and have long been revered as a superfood.

They contain almost half your daily quota of vitamin C, vitamins B5, A and E, potassium and antioxidant polyphenols, plant substances which lower blood pressure, strengthen the immune system and help reduce the risk of heart disease and help blood circulation.

Antioxidants also help clean out the arteries, encouraging good blood circulation. This is vital for genital health and enjoyable sex.

Men and women who drank a daily glass of the fruit’s juice for two weeks experienced a surge in the hormone testosterone, which increases libido in both genders.

The latest achievement claimed for pomegranates, will be welcome development among those who would prefer a natural aphrodisiac.

Researchers at Mindlab International at the University of Sussex recently uncovered an unexpected health benefit during a study, pomegranate juice also helps increase sex drive in men and women.

Couples who drank pomegranate juice were found to have increased levels of sexual interest and kissed each other more passionately than the other participants. Both sexes benefited but the results were more noticeable in the men.

In a study by researchers from Queen Margaret University in Edinburgh, involved 58 volunteers aged between 21 and 64.

By the end of two weeks both sexes had seen ‘significantly increased’ testosterone levels.

For men this affects traits such as facial hair, a deep voice and greater sexual urges.
It is also produced in female adrenal glands and ovaries, raising a woman’s sex drive and strengthening bones and muscles.

As a side effect, increased testosterone can help raise mood and memory and even relieve stress such as ‘pre-match nerves’ or stage fright, said the study.

Testosterone levels increased between 16 percent and 30 percent among the subjects, while blood pressure plummeted. 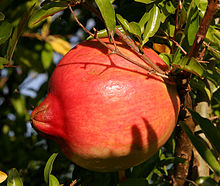