Scientists at the State University of New York at Albany studied satellite data of the areas around the wind farms, in Texas, from 2003 to 2011.

Satellite data over a large area in Texas, is now covered by four of the world’s largest wind farms, it has found that over a decade the local temperature heats up by almost 1 degree Celsius as more turbines are built.

Wind turbines could warm local climates up to ten times faster than the natural rate, a study has shown.

As more wind farms are built, temperature increases may have a long-term impact on wildlife and regional weather patterns, with experts warning that the effects from large farms could alter wind and rainfall patterns.

Publishing the scientists’ findings in the scientific journal Nature, they said: ‘We attribute this warming primarily to wind farms.

Some scientists have suggested that giant wind farms, comprising hundreds of thousands of turbines, would not only alter the weather but could be used to control it.

‘The temperature change could be due to the effects of the energy expelled by farms and the movement and turbulence generated by turbine rotors.

‘These changes, if spatially large enough, may have noticeable impacts on local to regional weather and climate.’

But they warned that firm conclusions should not be drawn until more research had been carried out.

The world’s wind farms last year had the capacity to produce 238 gigawatts of electricity at any one time a 21 percent increase in 2010. 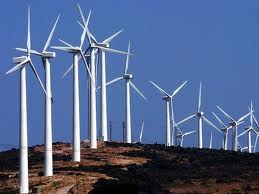