Several studies have linked drinking green tea to lessening psychological problems. The elderly are less likely to suffer from depression if they drink several cups of green tea everyday.

The probable reason, according to Japanese researchers, is due to a “feel good” chemical that is found in this type of tea. Green tea is widely consumed in many Asian countries like China and Japan.

Dr. Kaijun Niu, of Tohoku University Graduate School and colleagues have investigated 1,058 relatively healthy elderly men and women.
About 34 percent of the men and 39 percent of the women had symptoms of depression, according to the study that was published in the American Journal of Clinical Nutrition.

It has been found that men and women aged 70 and older who drank four or more cups of green tea daily were 44 percent less likely to have symptoms of depression.

According to researchers, the apparent effect of drinking more green tea on alleviating symptoms of depression did not go away after they factored in social and economic status, gender, diet, history of medical problems and use of antidepressants.

A green tea component, the amino acid theanine, which is thought to have a tranquilizing effect on the brain. However, further studies are needed to confirm whether greater green tea intake actually has antidepressant effects, the researchers added. 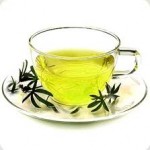