Malignant melanoma can develop in normal skin, especially those areas exposed to sunlight, but most come from moles.

Generally, most moles or nevi (pleural for nevus) are benign in nature. However, a small percentage of benign moles becomes malignant or cancerous and if this happens it is called a malignant melanoma which is one of the three most common types of skin cancer, the other two are basal cell carcinoma and squamous cell carcinoma.

Among the three, malignant melanoma is the most dreadful because once it has penetrated the skin it spreads rapidly and becomes highly fatal.

Despite its invasive nature, the cure rate for malignant melanoma is almost 100 percent, if it is diagnosed and removed early, however, once it has spread or metastasized to any other tissues or organ, it has a very low curing rate.

The following mole characteristics that warrant consultation with a physician:

*** When the mole enlarges, darkens or changes in color, ulcerates, bleeds, itches, or gets painful or inflamed.

*** Irregular and blurred borders where the pigment appears to be leaking into the normal surrounding skin.

*** Irregular topography of the mole, when it is partly raised and partly flat.

*** Variegated color, having a pattern that manifest several colors or shades.

*** Located in an area that is subject to irritation, as in joints.

Suspicious moles have high risks of becoming cancerous and must be removed, preferably by surgery.

Surgical excision allows for complete removal of the mole and for the excised tissue to be sent to the laboratory for microscopic examination to determine whether the mole is benign or malignant. 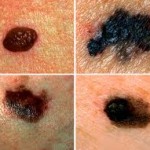