The last time that the Duke and Duchess of Cambridge went to Kenya was a year ago when they were engaged and holidaying together.

The region has experienced its worst drought in a half of a century, affecting 13 million people and exposing the lives of 320,000 children in jeopardy.

Since becoming a member of the Royal family, the Duchess used her first interview during a visit to a UNICEF aid depot in Copenhagen to urge the public to donate money to help ease the crisis.

In doing so she would be following in the footsteps of Diana, Princess of Wales, who fed starving children during a visit to a Red Cross aid station in Zimbabwe in 1993.

The Duke described the situation in East Africa as ‘horrendous’ and made a direct plea to the public, for anyone who can do anything to help.

The Duke and Duchess’s visit to UNICEF’s worldwide aid distribution center was the first overseas charity visit they had undertaken since their marriage, and only their second working trip abroad as a couple.

The Duchess helped Isaac Maina, a UNICEF worker, to pack supplies to be shipped to Nairobi.

The couple were given a first-hand account of the worsening crisis in Kenya,
Ethiopia, Somalia and Djibouti by the Crown Princess of Denmark, who has just returned from the famine zone, and who joined them at the depot with her husband, Crown Prince Frederik.

The Duke and Duchess arranged the visit to the UNICEF warehouse at short notice after becoming ‘very troubled’ by the famine and ‘deeply moved’ by reports of the disaster.

A visit to Africa by the couple is certainly something they are considering as soon they could fit into their schedule, according to a royal source.

One possibility also is the couple could fly to Africa next June, after the Queen’s Diamond Jubilee weekend, when the Duke is expected to compete in the Safaricom Marathon on the Lewa Downs in Kenya to raise money for the Tusk Trust, of which he is patron. 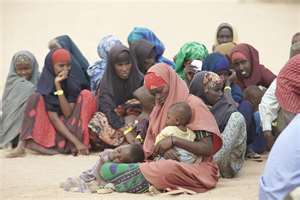