Novak Djokovic of Serbia wins over Lukasz Kubot of Poland, 6-1, 6-2, in the second round at the Swiss Indoors.

It took the top ranked Serb almost an hour to dispose Kubot. Djokovic since winning the U.S. Open improved his record to 66-3, his first tournament after the US Open.

Marcos Baghdatis of Cyprus is the next opponent for Djokovic in the quarter finals.
There were also second round wins for unseeded players, Florian Mayer of Germany, Kei Nishikori of Japan and Mikhail Kukushkin of Kazakhstan.

Seventh-seeded American Andy Roddick was to face Radek Stepanek of the Czech Republic, aiming to join Djokovic and Roger Federer as the only seeds in the last eight.

Nishikori continued to make good use of his wild-card entry, beating Andreas Seppi of Italy, 6-3, 7-6 (4).

Mayer beat Ivan Ljubicic 6-3, 6-1 for his first victory in four matches against the big-serving Croat.

Kukushkin reversed his qualifying-round loss against James Blake to beat the American 6-3, 6-4. He will play Nishikori in the quarterfinals. 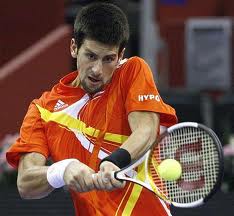