People who eat too little vegetables are deficient in all micro-nutrients required for good nutrition. The alarming decrease of vegetable consumption is a good measure.

The decline in almost of the vegetables consumption in the Philippines is a serious concern that need to be addressed. If you think most of the “pinakbet” is consumed in the Ilocano North, this is not so nowadays. There are even farmers who grow them don’t eat all that much vegetables either.

Not only are vegetables’ availability is less and declining, they are highly seasonal. Besides, erratic prices results in further decline of vegetables consumption. Less people eat vegetables when they are more expensive.
The consumption surveys made in northern Philippines confirm low vegetable consumption at the farm level even for farmers growing the vegetables.

The average per capita consumption reflects the highly seasonal availability of vegetables when they are more expensive during the months of May to July and during the last quarter of the year than they are from February to April.

Micro-nutrients such as iron, calcium, thiamine, niacin and ascorbic acid are all deficient, and the deficiency level in each case is higher than the deficiencies in energy and protein. Generally, low vegetable consumption results in the micronutrients deficiency.

Farm surveys conducted also show the seasonal nature of vegetable consumption in northern Philippines. A good example is the consumption of calcium, vitamin A and vitamin C found in vegetables are less than the recommended levels. This occurs during the season when vegetable prices are higher.

The availability of iron seem to be at the minimum required level. While most of the iron in the Filipino diet is from rice, studies however, indicate that rice is a poor source of iron and thus iron availability is far below the recommended level.

With funding from the German Ministry for Economic Cooperation and Development, it is a collaboration project with the Central Luzon State University (CLSU), Bureau of Plant Industry (BPI) and the Technical University of Munich.

The site chosen for most of the project studies is close to Metro Manila and CLSU. It is an area with round intensive vegetable farming that produces primarily for the Manila market.

Studies are being made to develop socioeconomic profiles of vegetable growers; resource inputs, cost and benefits; and consumer preferences and the role of vegetables in micro-nutrition.

One primary objective is to reduce the quantities of chemical fertilizers and pesticides application in vegetable farms so that much less pesticide residues on vegetables reach the market.

Crop management will enhance production during the wet season when vegetable supplies are generally low. 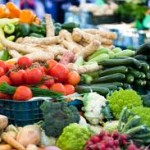