Ernie Els of South Africa wins the 2012 British Open by carding a two under par 68 in the final round to clinch the victory as earlier leader Adam Scott of Australia faltered and stunningly bogeyed his final four holes that settled him for second place at five over par 75.

The Sunday’s victory came 10 years and one day after Els’ other Open crown, when he won a four-man, four-hole playoff at Muirfield.

World number 13 Scott, chasing his first major championship, started the last round with a four-shot lead and seemed to be cruising to victory as he maintained that cushion with six holes to play.

But a late attack of the jitters caused him to drop strokes at each of the last four holes, allowing Els to slip in through the back door and clinch the victory.

Els, who began the day six shots adrift, clinched his fourth major title and first since winning the 2002 Open at Muirfield.

The three time British champion, threatened at times but a triple bogey via a greenside bunker at the par-four sixth and three straight bogeys from the 13th sank his chances of a 15th major and first since the 2008 US Open.

Brandt Snedeker also was at 3-under after a 74, dropping from contention after back-to-back double bogeys at Nos. 7 and 8.

World number one Luke Donald signed off with a one under 69 to finish in a share of fifth place with Graeme McDowell who carded a five over 75. 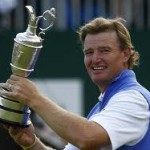