Sally Ride made history as the first American woman to go into space died in in La Jolla, California after she loses a 17-month battle against pancreatic cancer. She was 61.

She became an astronaut in 1978, and went on her first space shuttle mission on board the Challenger in 1983 at the age of 32.

President Obama said in a White House statement. “She inspired generations of young girls to reach for the stars, and later fought tirelessly to help them get there by advocating for a greater focus on science and math in our schools. Sally’s life showed us that there are no limits to what we can achieve, and I have no doubt that her legacy will endure for years to come.”

Word of Ride’s death came in an announcement from Sally Ride Science, the educational venture she founded after leaving NASA.

Ride made a second space shuttle flight in 1984, also aboard Challenger, and was in training for her third mission when Challenger exploded in 1986, killing all seven crew members.

Following the accident, she served as a member of the presidential commission that investigated the causes of the fatal accident. She also served on a similar board following the Columbia space shuttle accident in 2003.

After she left Nasa, Ride became a professor at University of California, San Diego, director of the California Space Institute and served as a science fellow at Stanford University.

In 2001, she founded Sally Ride Science, a which is aimed at promoting math and science for girls.

She is survived by her mother, Joyce and long time partner of 27 years, Tam O’Shaughnessy, who is the chief operating officer and executive vice president of the Sally Ride Science foundation. 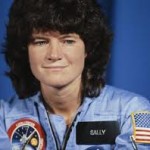