The process that spawns icebergs, known as calving, is a natural, periodic process affecting all glaciers that terminate at the ocean.

Thousands of these ‘calving events’ happen in Greenland each year, ranging from the unremarkable to the striking.

This most recent calving is neither of the two in terms of size; with an area of roughly 120 sq km (46 sq mi), it is about half the size of the iceberg that broke off the same glacier in 2010.

Looming larger in the future is the breakup of the Pine Island Glacier in Antarctica – which already shows a 30km-long crack, which could happen any day. And they get far, far bigger than that.

Scientists have raised concerns in recent years about the Greenland ice shelf, saying that it is thinning extensively due to thermal warming.

One fact is that the Petermann glacier’s margins have now retreated to a point not seen in the last 150 years.

The calving is not expected have an impact on sea levels as the ice was already floating.

Icebergs from the Petermann Glacier sometimes reach the waters off Newfoundland in Canada, posing a danger to shipping and navigation, according to the Canadian Ice Service.

Floating ‘ice tongues’ in front of land-based glaciers tend to block the ice flow headed for the sea. When ice chunks break loose, the land-based glaciers behind them often move more quickly, according to Andreas Muenchow of the University of Delaware.

The accelerated movement of the Petermann Glacier after the 2010 break was ‘noticeable but not dramatic,’ he added.

For now, glaciologists, working with Earth and climate scientists of every field, are loath to make an explicit connection between iceberg formation and the broader debate around climate change.

Jonathan Bamber, director of the Bristol Glaciology Center at the University of Bristol said: “We can’t do that yet,” but “I can’t say that yes, this calving event is a consequence of the marked atmospheric warming that’s been taking place over Greenland in the recent decades, but it is certainly more likely to take place as a consequence of that warming.” 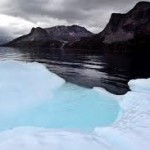