Miami Heat coach Erik Spoelstra said that Lebron James would be involved offensively when the Heat clash with the Dallas Mavericks in Game 5 of the NBA finals.

James just manage eight points in Tuesday’s 86-83 loss in Game 4, which level off the series 2-2, and the Heat are going to need more out of him on Thursday.

“He will be more aggressive and have more of an attack mentality tomorrow night,” Spoelstra said. “He doesn’t need to over think it. He’s a great player.

James is averaging 17 points a game in the finals, credible for most players but below-par for the former scoring champion and two-time league most valuable player.

One of the NBA’s most dynamic scorers and a go-to guy with the game on the line, James said he was “not in a good rhythm” down the stretch on Tuesday.

James had nine rebounds and seven assists on Tuesday but his lack of scoring is hurting Miami, especially during the fourth quarter of the tightly contested series. 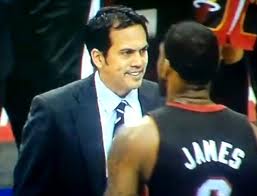