The EU endorsed tighter shark fishing rules on Monday to ensure fishermen respect a ban on slicing off the fins of their catches and throwing the live body overboard to drown. The European Parliament must now take up the proposal.

The EU has prohibited shark finning since 2003, but an exemption allows fishermen with special permits to remove the fins from their carcass out at sea and bring back the remainders together or land them in different ports.

But, while shark finning is forbidden in EU waters and vessels, the ministers said in a statement, “the still possible processing on board has cast doubts about the effectiveness of controls.”

“In recent years, some shark populations have been severely targeted and put under serious threat as a result of a dramatic increase in demand for shark products, fins in particular,” the EU ministers said.

Sharks are exceptionally vulnerable with several dozen species threatened with extinction because they were slow to grow and with very few young per birth.

Shark finning has also increased due to a strong demand for traditional medical cures in Asia, the ministers added.
EU nations combined account for the second-largest share, with 14 percent of the world’s catches.

Asia’s taste for shark fin soup is viewed as a key threat to sharks, with marine protection groups saying up to 73 million are killed annually to satisfy demand for the delicacy. 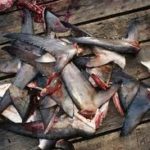