Eurozone leaders have warned of a difficult year ahead, as many economists predict recession in 2012.

German Chancellor Angela Merkel said Europe was experiencing its ‘most severe test in decades’ and vow to do ‘everything’ to save the euro and end Europe´s sovereign debt crisis.

French President Nicolas Sarkozy said there had to be structural changes to the French economy while Italian President Giorgio Napolitano warn Italians they will have to make sacrifices to avoid financial collapse.

Growth in Europe has stalled as the debt crisis has forced governments to slash spending.

The cost of borrowing for some of the eurozone’s largest economies, including Italy and Spain, has shot up in recent months as lenders fear government will not be able to pay back money they have already borrowed.

With growth stalled, the pressure is on governments across Europe, not just ones using the single currency, to cut spending in order to meet debt obligations.

Mr. Sarkozy is due to meet Mrs. Merkel in early January to push forward a European Union agreement in December for a new fiscal compact.

Chancellor Merkel said in her TV address, that despite Germany’s relatively good economic situation, “next year will no doubt be more difficult than 2011”.

Greek Prime Minister Lucas Papademos, another technocrat who was appointed to lead an interim coalition government after the debt crisis forced George Papandreou to resign, also warned of a difficult year ahead.

Fears are now focusing on a potential second credit crunch, triggered by the exposure of banks across Europe to Italy’s huge debt. 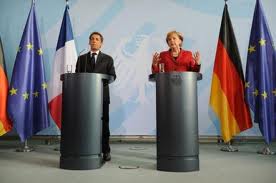