The world no. 1 claimed the US$ 250,000 following his defeat with Gael Monfils followed by Roger Federer and then the conqueror Of Rafael Nadal in the earlier elimination round, David Ferrer.

The fifth-ranked Ferrer had upset second-ranked Nadal in the semis but had no answer for Djokovic, who broke the Spaniard five times and took 3-0 leads in both sets.

The Serb is gearing to defend his Australian Open title which will start on January 16.
Djokovic finished the match with consecutive aces and said it was not impossible to repeat his tremendous feats from 2011 in the coming twelve months.

Earlier, Spain’s world number two Rafael Nadal beat Federer 6-1, 7-5 in the third-fourth place play-off.
The third-ranked Federer struggled with unforced errors and an inconsistent serve. His game improved in the second set, but Nadal ended the match with a blistering forehand into the corner.

“It’s about getting ready and feeling fine out there and enjoying a great atmosphere here and having the chance to play world class players,” Federer said. “Trying a few things, see where you are at and see where the other guys are at.” 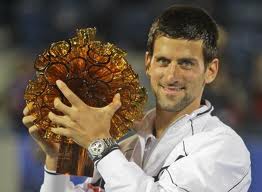