Five of eight tuna species are now threatened or nearly threatened with extinction due to overfishing, according to the Red List of Threatened Species, compiled by the Swiss based International Union for the Conservation of Nature (IUCN).

Atlantic bluefin, with populations in both the east and west fished to the edge of viability, is now officially ‘endangered.’

Southern bluefin tuna stocks have already crashed with little hope of recovery, resulting in a status of ‘critically endangered’, the IUCN reported.

All bluefin tuna species ‘are susceptible to collapse under continued excessive fishing pressure’, said Ken Carpenter, a professor at Old Dominion University in Norfolk, Virginia and the head of the IUCN’s Marine Biodiversity Unit.

Other tuna species under sharp pressure from high tech factory ships that comb international waters in search of ever dwindling stocks include big-eye, classified as vulnerable, along with yellow fin and albacore, both ranked as ‘near threatened’.

This is the first time that fishery scientists, ichthyologists (fish specialists) and conservationists have come together to jointly produce an assessment of the threat facing a commercially important group of fishes,’ said Bruce Collette a senior scientist at the U.S. National Marine Fisheries Service and head of the IUCN’s Tuna and Billfish Specialist Group.

The report is being released ahead of a July 11 to 15 meeting in la Jolla, California of the world’s five regional fisheries management organizations (RFMOs), intergovernmental groups set up to insure that tuna fisheries remain sustainable.

The reference organization for the conservation status of Earth’s animals and plants said for the first time Thursday that most species of tuna are urgently in need of protection. 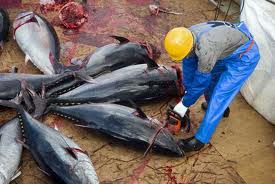