China’s ancient exercise qigong originated more than two centuries ago, the Chinese word itself means gathering energy and training it towards the organ or part of the body where energy is needed.

Energy that can be gathered from our natural environment such as the sky, the ground, the mountains, the clean bodies of water, the healthy trees and the unpolluted air.

Ancient Chinese philosophers created qigong as the exercise that would be effective to achieve total wellness. During the early times qigong was a ‘secret exercise’ exclusive only within the imperial palace, since it was primarily designed for the emperors and their court’s good health and longevity.

Later, in the modern times the next generation of emperors decided to share the qigong techniques with all their citizens, young and old alike, with the goal of making their nation healthy and strong.

Today’s Chinese leaders allowed qigong to be shared by the rest of the world. Qigong masters started to spread the art of qigong from the Orient to the West, and throughout the globe.

Qigong is a stationary exercise which doesn’t need a lot of space -just spread arms width is enough, it is the best exercise for people whose job entails long hours of standing at one spot which result to frozen shoulders and painful back or hips.

Most of the qigong movements are inspired by the beautiful things in nature which are the symbols of grace, strength and longevity. Such movements like Painting a Rainbow, Parting the Clouds, Boat Rowing, Rolling with the Waves, Pressing the Wind, Windmills Turning in the Breeze, The Wind Rustling, Lotus Leaves – will make you feel the harmony in nature which can give you inner peace besides promoting good circulation of energy throughout your body.

Other qigong movements like Dragon Traveling from East to West, Dragon Emerging from the Sea, Flying Wild Goose, Flight of the White Crane, Butterfly Flaps, Swan Drinking in the Pond, The Cat Playing with the Fairy – will make you feel the strength and vivacity of the animals whose movements are imitated.

However, there are some qigong movements that should not be done by people who are suffering from heart ailment, hypertension and vertigo. They should avoid those movements with repetitious neck rotation, bowing and bending forward.

Qigong movement can be prescribed in accordance to each individual needs. You can adopt the ‘Waving Hands By the Lake’ movement which can help moderate blood pressure or the “Floating Silk in the Air’ which can promote good blood circulation and metal health and to the not so healthy people, the sitting qigong is prescribed.

The effectiveness of qigong, as a self healing exercise, depends on proper breathing. This is the key to the smooth flow of energy throughout your body. With closed mouth, start with inhaling very deeply – down to your diaphragm; and then exhale very slowly.

There are more than a hundred movements of qigong, but according to qigong masters, a twenty minute practice of even one movement is enough to give you energy; and doing it everyday can already help maintain your wellness in your body, mind and spirit.

Some of those who have experienced the better effects of qigong have shifted their strenuous fitness regimen to this slow motion exercise which surprisingly can also induce perspiration. 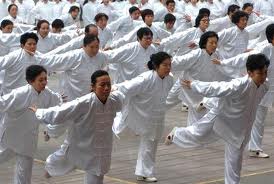 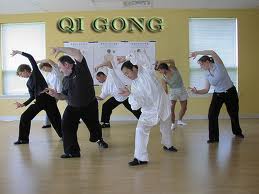