The fight which was supposed to go the distance ended in a bizarre way in the 4th round.

It was that scenario when Victor Ortiz was pummeling Floyd Mayweather Jr. at the corner of the ring when a deliberate head butt ensued by Ortiz to Mayweather Jr.’s chin which was seen by the referee,Joe Cortez.

The referee momentarily stop the fight for a time break to reprimand Ortiz and penalize him with a point deduction.

Ortiz promptly acknowledged his mistake and was apologetic to Mayweather, which during this time, Ortiz did not expect Mayweather to throw a punch because there was no go signal yet from the referee that both fighters to proceed fighting.

While Ortiz was still on the act of pacifying, Mayweather assaulted offguard Ortiz with a quick 2 punch combination to Ortiz’s face that ended the fight.

It was so bizarre that the incident happened during a time break and yet the referee counted out Ortiz when he went down the canvas.

There was a complete confusion on the part of Cortez, he seemed to forget that he called for a time out and he did not give both fighters the notice to proceed to fight.

One of these days we shall be hearing from the Ortiz camp if they will lodge a formal complaint about the incident, and if they are planning a rematch on such a controversial ending.

For sure most boxing aficionados were not happy the way the fight ended. Let’s see what comes next! 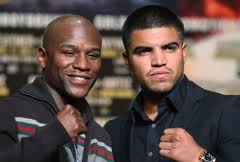