Officials with the Hurricane Center accurately predict that Irene would hit North Carolina, and then stir up the coast into New York.

But they thought the storm would become more powerful, its winds increasing in intensity after it passed through the Bahamas. Instead it lost strength. By the time it made landfall in North Carolina two days later, its wind were about ten percent lighter than predicted.

Forecasting a storm’s strength requires knowing the details of its structure, the internal organization and movement that can affect whether it gains or loses energy and plugging the data into an accurate computer model.

Scientists have struggled to do that. They often overestimate strength, which can lead to gripping about over preparedness, as it has with hurricane Irene. But they have sometimes underestimated a storm’s power, too, as with hurricane Charley in 2004.

Frank Marks’s, the director of the National Oceanic and Atmospheric Administration (NOAA) division is about three years into a ten year program to improve forecasting accuracy.

Dr. Marks has gathered what amounts to a parallel forecasting universe, using a computer complex in Colorado that runs the experimental models for hours, with data from the aircraft and other sources. The results are also made immediately available to the hurricane center’s actual forecasting operations.

Airborne Doppler radar is not the only way to gather data. The NOAA planes also drop sensors, called dropsondes, that radio back measurements of temperature, pressure, humidity, wind speed and others that take readings of water temperature and currents. NOAA has also experimented with equipping drone aircraft with similar sensors and sending them into storms.

But radar measurements are probably the most useful, because they can scan the storm from top to bottom. Dropsondes provide information only from specific points as they fall. Airborne radar reveals the three dimensional structure of a storm.

Dr. Marks’s team did a first real time demonstration of the concept during hurricane Ike, which hit Galveston, Texas, in 2008. The results were promising.

Dr. Marks said he could not predict when the experimental forecasts would be good enough to gain the full confidence of the hurricane center’s specialists.

The research has shown results, producing some intensity forecasts that, while not as accurate as desired, are more in line with actual outcomes.

In the case of Irene, some modelling did show the storm’s intensity is decreasing. But others did not, and the center went with more conservative forecasts that call for a stronger storm.

“You have to remember forecasters can’t just go with the breeze,” Dr. Marks said. He added: “They want to keep a consistent, straightforward message. And they want to err on the side of conservatism.” 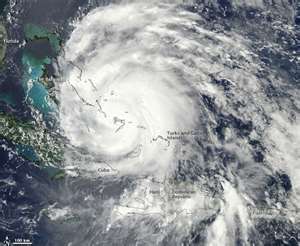