There could be a Glee tribute episode for Pippa Middleton as Kurt Hummel, the Glee character plans a Broadway musical for her.

The Broadway musical is entitled ‘Pip, Pip, Hooray’ which could be shown in the third series of the US season finale.

The finale seems to set up what fans could expect to see about the bridesmaid Pippa. The planned Broadway musical have sparked pleas from Glee and Pippa fans all over the world to turn Hummel’s idea into reality.

The Rocky Horror Picture Show, Lady Gaga, Britney and Madonna have all been featured in Glee with each whole respective episode dedicated to them.

If Pippa’s tribute episode is to push through, there would almost certainly be a song or two dedicated to her bottom.

Pippa’s bottom caused a real stir around the world when she stepped out in her bridesmaid dress during the Royal Wedding. With such exposure, Pippa no doubt could be the hot favorite to win the ‘Rear of the Year’ accolade. 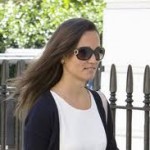