Mildred Baena, Arnold Schwarzenegger’s mistress is threatening to sue Entertainment Tonight (ET) after they aired an interview with her husband, Rogelio.

During the ET interview, Rogelio Baena claimed that her wife Mildred misled him to believe that her child with Schwarzenegger was actually his. He called the affair a betrayal, and says he was shocked when he learned the news.

According to a source, Mildred, has hired a legal team to repudiate her husband’s claim during his TV interview.

Mildred’s lawyers have since spoken out against the claims, however, suggesting that Rogelio surely knew he wasn’t the father because he was out of the country when Mildred conceived the child.

“Thus, Mr. Baena knew then, just as he knows now, that he could not possibly have been the child’s father,” Mildred’s lawyers said in a statement.

They went on to suggest that Rogelio was living in Columbia and only returned to the U.S. “to lie on television for a six figure paycheck.” 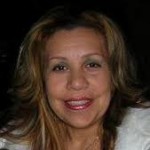