The bacterial infection responsible for stomach ulcers have been linked to Parkinson’s disease according to researchers in the US.

In a study made on middle-aged mice, the equivalent of being between 55 and 65 in humans, were infected by Helicobacter pylori bacteria, they went on to develop Parkinson’s like symptoms later, such as reduced movement and decreased levels of a chemical, dopamine, in the brain.

Parkinson’s disease affects the brain and results in slow movements and a tremor.

The findings suggest that H. pylori infection could play a significant role in the development of Parkinson’s disease in humans, according to Dr. Traci Testerman, from the Louisiana State University Health Sciences Center.

The researchers believe the bacteria are producing chemicals which are toxic to the brain.

Dr. Testerman said this new chemical was almost identical to one found in seeds from the cycad plant, which had been shown to trigger a Parkinson’s-like disease among people in Guam.

“H. pylori eradication in late stage Parkinson’s disease is unlikely to result in significant improvement,” Testerman said. “Certain neurons are killed before symptoms begin, and more are killed as the disease progresses. Those neurons will not grow back.” 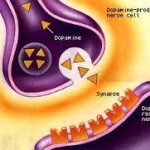