Five tuna species are classed as ‘threatened’ or ‘near threatened’ with extinction due to overfishing, according to the Red List of Threatened Species, prompting Greenpeace to appeal for fewer industrial-scale boats.

The environmental group accused the tuna industry of failing to stop the decimation of fish stocks, and called for an end to fishing methods that also accidentally snare turtles, dolphins and sharks.

In the United States, the world’s largest canned tuna market, major brands have pledged to work with their suppliers to reduce the amount of marine life netted accidentally.

The group wants a ban on ‘fish aggregating devices’ that lure marine life into vast bucket-like nets with the result that 10 percent of each catch is made up of species other than tuna.

The tuna industry, from the factory-sized boats to supermarkets, says it recognizes the problem of dwindling stocks and follows quotas limiting catch to mature fish in waters where stocks are abundant.

Greenpeace says tuna populations can rebound if they are given adequate protection.

The Atlantic blue fin species, which can live to 40 years old and grow to more than four meters (13 feet) long, is in the gravest danger of disappearing with stocks estimated in some areas to have halved over four decades.

“As with any industry there are bad actors,” said Susan Jackson, head of the International Seafood Sustainability Foundation (ISSF) — a coalition of conservation groups, scientists and the tuna companies.

“But we must aim to prevent tuna stocks and their ecosytems being exposed to unnecessary pressure,” she said, adding the industry will still “thrive” with tightened controls on catches.

One ISSF idea is to equip boats with tablet computers to record hauls and help build a detailed picture of global tuna stocks and the scale of accidental catches, she added.

Five main species of tuna make up the annual worldwide catch of 4-4.5 million tons, in which 60 percent destined mainly for supermarket shelves. 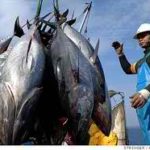