World number two Rafael Nadal defeated the 111th rank in the world, Italian Simone Bolelli 6-2, 6-2, 6-1 to advance into the second round of the French Open Championship.

The 25 year old Spaniard disposed Bolelli in 1 hour and 58 minutes.

Against Bolelli Nadal was barely tested, making only 18 unforced errors compared to his opponent’s 38, and from 2-2 in the first set he won eight games in succession.

The highlight of the match for 26-year-old Bolelli, who has never progressed beyond the third round at a Grand Slam, was when he broke serve in the second set after Nadal double faulted.

Nadal then had to save a trio of break points to stop Bolelli closing the gap to 4-3, but the world number two moved two sets clear after an hour and 24 minutes on court.

He completed victory after winning eight out of nine games.

Nadal’s next opponent will be Denis Istomin of Uzbekistan, who beat Igor Kunitsyn of Russia 6-2, 6-1, 6-2.

The Spaniard has now won 46 of his 47 matches at the French Open since his debut in 2005, his only defeat coming in the fourth round of the 2009 event to Robin Soderling.

World number four Britain’s Andy Murray resumed his bid with a straight-sets victory over Tatsuma Ito in round one of the French Open.

Murray next plays Jarkko Nieminen of Finland after his opponent Igor Andreev retired while trailing 3-6, 6-2, 2-1. 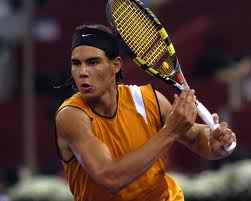