A study released by Dr. James Hansen, the dean of climate scientists and director of the Nasa Goddard Institute for Space Studies, concludes that the recent heat waves and extreme summers likely were caused by climate change.

The study, which was published by the Proceedings of the National Academy of Sciences, looks at the past six decades of global temperatures and finds what Hansen described as a ‘stunning’ rise in the frequency of extremely hot summers.

“Our analysis shows that it is no longer enough to say that global warming will increase the likelihood of extreme weather and to repeat the caveat that no individual weather event can be directly linked to climate change,” said Dr. Hansen.

“To the contrary, our analysis shows that, for the extreme hot weather of the recent past, there is virtually no explanation other than climate change.”

Extremely hot weather events used to be very rare, but in the past 30 years the temperature extremes have soared and now cover around a tenth of the world, he said.

It dismissed the idea that specific weather patterns are by themselves sufficient to explain today’s extreme anomalies. Phenomena like La Nina have always been around, but large areas of extreme warming have only come about with climate change, the study said.

Kevin Trenberth, a scientist with the federally-funded National Center for Atmospheric Research, who shared the 2007 Nobel Peace Prize for his work on climate change, said for most of the last century record high and low temperatures were about even.

So far this year, there have be 15,055 record highs, but only 1,343 record lows. That ratio of about 11 to 1, Trenberth said, is some of the clearest evidence yet of climate change. 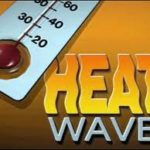