An average person can add the equivalent of two to three teaspoons of fat to their hipline in a matter of hours after eating.

Once caloric food is taken, fat is stored on the waistline within hours, say scientists, far faster than previously thought.

A study made by Fredrik Karpe and Keith Frayne of Nuffield Department of Clinical Medicine, University of Oxford, found the first fat from any meal enters the blood around an hour after being ingested.

By the time three or four hours have passed, they found, most of it had been incorporated into the adipose tissue, much of which lies in the short-term fat stores in the waist.

Fat stored on the waistline is short term, but excessive eating could lead to more fat on the hips, bottom and thighs.

The finding that it is possible to ‘become fat’ within three hours contradicts the widely-held belief that weight gain is gradual.

Previously, many have believed the process is much more gradual with food traveling from the gut into the blood, where is was used by muscles, with any excess being stored as fat.

However, the Oxford University research suggests a more complex and rapid process.

In the experiments, volunteers ate fat which could be traced around the body. This was found to take around an hour to be broken down in the gut and then enter the bloodstream as tiny droplets.

The droplets are then whisked around the body, but not for long, before they are ‘caught’ and stored. ‘The process is very fast,’ Karpe, professor of metabolic medicine, said.

‘The cells in the adipose tissue around the waist catch the fat droplets as the blood carries them and incorporates them into the cells for storage.’

In a paper published in the Physiological Reviews, the scientists also suggested fit people found it easier to get rid of unwanted fat, as exercise gives a long-term boost to fat-burning mechanisms.

The good news is the storage system is temporary, with the fat deposited quickly drawn on, or mobilized, to feed our muscles. But when we overeat, it is a different story, because ‘there will just be constant accumulation and you will start to put on weight,’ Professor Karpe warns.

The finding comes in the wake of a warning that fat which settles around the middle is particularly harmful and could take years off your life.

The European Congress on Obesity heard last week that the secret of a long and healthy life is as simple as keeping your waist circumference measurement to under half that of your height. 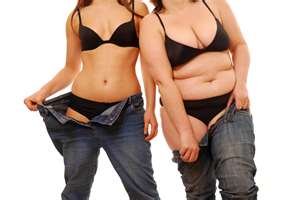