How I wish that Marquez could do it, it would be good for boxing, but unfortunately I could not see him winning because the welterweight is Pacquiao’s natural habitat while Marquez natural lair is the lightweight.

Even when they were fighting at the lower weights, Pacquiao had been already struggling in maintaining the weight when he fought Marquez.

Pacquiao has to go on forced diet just to keep up the weight but despite what he did Pacquiao floored Marquez 4X in their two meetings.

After their last meeting you can see the big difference between the two men when they move up, they are two weight classes apart.

It means that all the advantages is in Pacquiao’s favor who would be naturally bigger, quicker, stronger and younger than Marquez. Besides, Pacquiao is has greatly improved skill wise as a fighter.

If Marquez will stick to his usual old fighting style the fight will not go the distance and it will be his doom like Hatton.

But if he wanted to go the full distance he should choose either way a Shane Mosley or a Joshua Clottey survival mode to finish the fight. 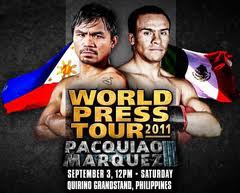