Saba, Carnaba or Sarabya as they are called in Philippine various dialects but referring to just one of the same banana variety, is one of more than 80 cultivars in the Philippines which is the main source of banana chips. It is also considered by some people as staple food aside from rice and corn.

Saba can also be processed into catsup, wine, flour, puree and other food and feed preparations. In the country’s effort to increase saba banana production, Philippine Council for Agriculture, Forestry and Natural Resources Research and Development (PCARRD) launched the program, Enhancing Productivity of the Saba Industry.

One of the major components of the project is Improved Management System of the Saba Industry. The Department of Science and Technology (DoST) funded project is piloted on Camiguin Island, a subprovince devastated by a banana disease known locally as ‘bugtok’ or ‘tibagnol’.

Bugtok or tibagnol, is a disease caused by the bacterium Pseudomonas solanacearum, and it is the major constraint not only in Camiguin but also in other Saba producing provinces all over the country.

The disease can affect the whole banana plant causing yellowing and wilting of leaves, brown discoloration of pseudo stem and fruit peduncle, reddish to black discoloration of fruit pulp, uneven ripening of fruits, and non detachment of bracts and male flowers even if these were already dry.

The researchers reported that crop loss among infected banana farms is as high as 70 percent. The researchers claimed that such disease incidence can be controlled.

Through the DoST funded project, farmers are taught how to control the disease with a comprehensive integrated pest management (IPOM) program.

Demonstration sites were set up to showcase the management of the disease. Other activities like site field visits in other disease infected areas, are also carried out to make the farmers more conscious of ‘bugtok’ disease management.

Through seminars and training courses, farmers have learned that early debudding and bagging of newly emerged fruits were helping in the control of the disease.

However, strict observance for sanitation is still the most important role in eliminating the disease. This entails the removal and proper disposal of infected and unnecessary plant parts, including plant debris and weeds in its environs and surroundings.

Sanitation will reduce the possible sources of infection and eliminate the breeding and hiding places of insects that transmit the bacterium from infected plants to healthy ones.

The researchers believe that strict sanitation implementation will dramatically reduce the insect population that helps proliferate the ‘bugtok’ disease.

‘Bugtok’ disease can be effectively transmitted by insects visiting and feeding on banana flowers. These insects contract the disease while they feed on banana flowers and in contact with bacterial exudates coming out from infected male buds.

To prevent the common Saba banana disease, the male bud must be removed or cut off from the fruit peduncle as soon as all the female buds (fruits) have come out to prevent insects from feeding and transmitting the bacterium that causes ‘bugtok’ or ‘tibagnol’. 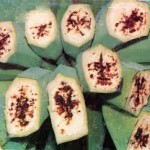 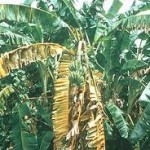