The victory also propelled Mahan to No. 4 from no. 14 in the World Golf Rankings and to the top spot in the FedExCup standings, 258 points head of 2008 Shell Houston Open winner Johnson Wagner.

Mahan could barely have wished for a bigger confidence-booster as he eased rather than accelerated to his fifth PGA Tour title.

Carl Pettersson of Sweden was runner-up at 15-under, followed by third-round leader Luis Oosthuizen of South Africa at 14-under.

Defending champion Phil Mickelson and current PGA Championship winner Keegan Bradley headed a group of four that finished at 12-under.

England’s Brian Davis, who began the day three off the leader, battled to stay in contention after dropping four shots in the first five holes. He eventually signed for a 74, which secured a tie for fourth place on 12-under.

Phil Mickelson, the defending champion, always likes to play the week before the Masters where he is a three-time winner. He managed to complete the tournament with a one-under 71 to finish in a group on 12-under.

Ernie Els failed to book his place at the Masters after he carded a two-under 70 to finish on 10-under.

The South African, twice a runner-up at Augusta National, needed to win in Texas to book his place in the first major of the year, but his score was only good enough for a share of 12th.

Lee Westwood hoped to find his groove at the Redstone Golf Club but instead finished with a one-over 73 to end on seven-under.

Graeme McDowell’s who landed second to Tiger Woods in the recent Arnold Palmer Invitational climaxed with his worst round of the week, posting a five-over 77 to finish on one-over. 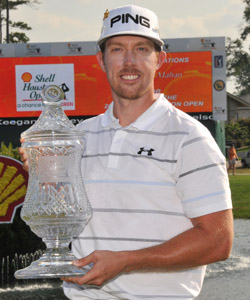