What killed hundreds of pelicans and nearly a thousand of dolphins at the same area in Peru?

Peruvian scientists have been able to examine a 70 kilometer stretch of shoreline, on which they found 592 dead sea birds, 538 of them pelicans.

Between January and April of this year, at least 780 dead dolphins have been washed ashore in Lambayeque, according to government figures.

The dead pelican were found in the same region of Peru where the dead dolphins were washed ashore earlier this year. However, the cause of their deaths are still unknown.

Peru’s oceanographic agency says it will investigate the deaths of pelicans and dolphins on the northern beaches.
Peru’s Deputy Minister for Natural Resource Development, Gabriel Quijandria Acosta, said a virus might have killed the dolphins.

A viral epidemic outbreak was linked to similar deaths of marine wildlife in Peru in the past, as well as in Mexico and the United States.

Hundreds of dolphins have been found stranded since January for unknown reasons, environmentalist Heinz Plengue said.
A number of possible causes, ranging from a virus to mining exploration in the Pacific Ocean, may be responsible for the deaths of the animals, experts said.

Its regional chief, Edward Barriga, recalled a mass die-off of pelicans and cormorants in the same area in 1997 due to the absence of anchovies blamed on the El Nino meteorological phenomenon.

Coast Guard official Cesar Villanueva in Lambayeque said Sunday he has never seen so many dying pelicans on the beach in 25 years on the job. 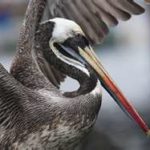