Indian exports are following a different path from that taken by other Asian countries like Japan, South Korea and China.

Those countries started by exporting products like garments and toys made by large numbers of low paid, low skilled workers, before moving to more sophisticated products like cars and industrial machinery.

Over the last decade, industrial export hubs have sprouted around India, some with the help of government planning. Here in Pune, about 160 kilometers east of Mumbai, a vibrant domestic automotive and engineering hub supplies the United States and other Western Markets.

India has largely gone straight to producing capital intensive items that require skilled workers but not necessarily many of them. Rather than pursue the traditional developing country model of exports, India aspires to achieve something more like Germany’s mix of industrial goods for the global market.

Chennai in the south has become India’s Detroit, as factories ship small cars to Europe, Africa and Latin America.

In the west, Gujarat State is home to several large petroleum refineries that take imported crude oil and process it into products like jet and diesel fuel that are sold in other Asian countries. Traditional exports like textiles and agricultural products together account for less than 20 percent of the goods India sells to the world.

In many ways, these are virtues born of necessity. The country’s poor transportation and electricity infrastructure and restrictive labor laws have discouraged some companies from setting up labor intensive manufacturing plants like those for which China is known. Instead many Indian exporters specialized in higher value goods and services that require fewer, but more skilled workers.

The flowering of these industrial bases can be traced to the early 1990s, when a financial crisis forced Indian policy makers to slough off socialist policies that tightly regulated industrial production and kept foreign competition out.

The changes let businesses set up factories based on demand and allowed foreigners to invest in India, exposing companies to greater competition.

Some economists predict the Indian economy will grow by 7.5 percent this year amounting to US$ 1.6 trillion dollars. Such growth would be down from 8.5 percent last year.

And it is below t he 10 percent growth rate that many economists say India could achieve if it invested more in infrastructure and if the government further relaxed its grip on many parts of the economy. The slowing growth is all the more reason the increase in industrial exports is a bright spot.

Analysts say Indian exporters have performed admirably given the challenge they face. But for India to become an export powerhouse like China, which had exports of US$ 1.58 trillion dollars last year, policy makers must substantially improve its infrastructure, make labor regulations more flexible and improve basic education, said K.T. Chacko, director of the Indian Institute of Foreign Trade in New Delhi. 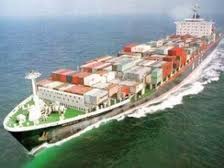