Arnold Schwarzenegger and Maria Shriver were seen together in Beverly Hills, California with their two sons Patrick, 17, and Christopher, 13 who was just released from the hospital Tuesday after a surfing accident.

They seemed to know how to carry themselves without any ongoing tension between them, despite the announcement of their separation and finally the filing of divorce on July 1.

The estranged couple were seen alighting from the same car when they arrived to the restaurant. The scenario seemed to be normal for the family who were enjoying their lunch at the restaurant. The occasion coincides with Schwarzenegger’s 64th birthday.

They seemed to enjoy the moment of being together as a family, the atmosphere is relaxed, a lot of goodwill noted despite the absence of their two daughters, Katherine, 21, and Christina, 19.

An observer noted that Shriver foots the bill when she was seen pulling out a credit card from her wallet and handed it to the waiter while she made an additional order of espresso for her estranged husband. Soon afterwards, they left the place after bidding each other goodbye, Schwarzenegger with his two sons and Shriver by herself. 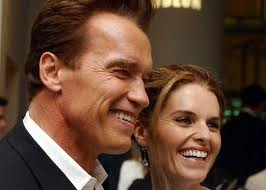