Economists and other scholars struggle to explain why Venezuela has such an extraordinary line standing culture, even compared with the rich bureaucratic traditions of some Latin American nations.

Some blame it on oil, and the byzantine state bureaucracy that coalesced to manage petroleum revenues.

Others, as is customary in some circles here, lay the blame on President Hugo Chavez. The president as the argument goes, has put Venezuela’s bureaucracy on steroids, nationalizing dozens of private companies and increasing the number of ministries to 27 from 14 when he rose to power in 1999.

In front of government offices, banks, bus stops, cinemas, hospitals, hair salons and grocery stores, there they are: lines spilling out onto sidewalks. Lines stretched out like an octopus limbs in various directions from government offices, including the Social Security Institute, Supreme Court and the Foreign Relations Ministry.

At one tower, housing the National Assembly and various courts, 117 people transacting government services stood in one slow moving line. In such a scenario, there are opportunities for some enterprising people. There is, the professional expediter who confronts Venezuela’s churlish bureaucracy on behalf of clients for a hefty fee.

Lowlier trades persist around Venezuela’s longer queue, too. There are those who simply stand in a line for a price, holding the space for someone else. Then there are entrepreneurs who work each morning at 4:00 a.m., renting plastic chairs for about US$ 2 dollars each.

Jorge Sayegh, a columnist for newspaper El Universal, in a sarcastic tone about Venezuelan’s acceptance and fondness for the long queue has this to say, “We’re attracted to lines like flies to honey, we actually love them. Lines for us are like a spouse from time immemorial whom we cannot stand, but without whom we cannot exist.” 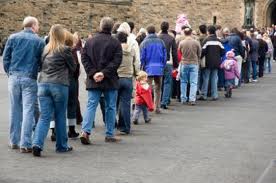