Very few people knew that celebrating birthdays and observing the commemoration of the birth of Christ Jesus were derived from the Roman pagan custom and tradition and has nothing to do with the faith.

From the evidence of the church reconstructed gospel or from any other sound tradition it was impossible to determine the birth of Jesus Christ.

Some said, that it has transpired based on speculation that Christ Jesus was born on the coolest and the longest night of the year which happen to be on December 25.

But based on historical facts, it was the triumph of Emperor Constantine who was the emperor of the Roman empire and during his reign that the church of Rome (Vatican) assigned December 25 as the date for the celebration which took place around 320 or 353 AD.

The choice of December 25 is based on paganism’s tradition, that Romans, which are mostly pagans (believers of many gods), they have celebrated one of their gods’ festivity, known as Mithraic feast of the sun-god.

The indication left the church grasped the opportunity to turn the people and its followers from paganism’s observance to a day of adoration of Christ Jesus which later become the trademark of Christendom and modern Christianity.

With the truth unraveled as to the origin of what most people believe as a legitimate birthday of Christ Jesus, one makes to wonder of how is Christmas relevant to our time. How long this scenario of making believe and false pretenses would last?

In reference to the bible’s version of the gospel, nowhere in Christ Jesus’ lifetime, it can be found that birthdays were observed and celebrated. That only shows that people during those times have not given so much attention and importance as to the occasion of their very existence in this world.

It is only through the plagiarist approach of the church adapting the paganism belief and giving relevance to it that it came into being.

The collusion and conjugal partnership of the church and emperor Constantine at the expense of other religions had made it possible that was once started as a church innovation become a major celebration in modern Christianity.

If Christ Jesus is only alive today, surely he will not condone that his name be dragged by the church in a controversy based on pretension and false belief which is not only misleading to people and its followers but in essence it’s morally wrong. 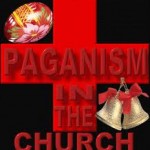