India is home to more poor people than any country in the world, a fact that stands in mute challenge to its ambitions as an emerging world power.

In decades past, fraud and waste have sapped efforts to help the poor. Rajiv Gandhi, a former prime minister, estimated that only 15 percent of every rupee spent on the poor reached them.

Social audit empowers villagers as watchdog to perform audits ensuring that the benefits of governments programs for the poor would actually go to the poor. As success or failure could have broad implications for India’s quest to bail out hundreds of millions of people out of poverty.

The social audits seek to change that. In many states, the audits have been perfunctory. But the results in the southern state of Andhra Pradesh, home to 76 million people, have been remarkable.

Social audits statewide have found US$ 20 million dollars worth of fraud over the past 5 years, and 4,600 officials have faced administrative or criminal charges, said V, Vasanth Kumar, the minister for rural development in Andhra Pradesh.

The results of the audits, down to tiniest details are available online for anyone to study. With the Indian government planning to spend a quarter of a trillion dollars to help the rural poor over the next 5 years, such audits will be crucial to reducing waste and fraud.

Villagers scour records and look for fraud, then hold public hearings. The concept has been around for decades, championed by influential social activists like Aruna Roy in Rajashtan province, the social movement she helped found, known as Mazdoor Kisan Shakti Sangathan (MKSS), has conducted social audits for years.

But Andhra Pradesh is the first state that has put its full political and bureaucratic weight behind them. Officials embraced the audits in part because they realized it was good politics to keep programs for the poor free from corruption.

Auditing the records, which run of thousands of pages is a painstaking work that would tire the sharp eyes of even a seasoned forensic accountant. Most of the auditors are village youths who have been trained, but who also rely on their knowledge of village life to spot fraud. 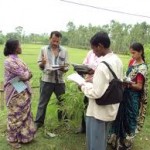