Roy Curtiss, of the Institute’s Center for Infectious Diseases and Vaccinology and professor in the School of Life Sciences, is part of a large, multidisciplinary Arizona State University (ASU) team that has been focusing on optimizing photosynthetic microbes, called cyanobacteria, as a renewable source of biofuels.

These microbes are easy to genetically manipulate and have a potentially higher yield than any plant crops currently being used for the production of transportation fuels.

Cyanobacteria have a tough, protective set of outer membranes that help the bacteria thrive in even harsh surroundings, creating the pond scum often found in backyard swimming pools. Like plants, they are dependent upon sunlight, water and carbon dioxide for growth

To get cyanobacteria to more readily release their precious, high fat cargo, Curtiss and postdoctoral researcher Xinyao Liu, placed a suite of genes into photosynthetic bacteria that produced enzymes to degrade membrane lipids, poking holes in the membranes to release free fatty acids into the water.

In a clever feat of genetic reprogramming of the cells, the enzymes are only produced when carbon dioxide, a vital ingredient of bacterial growth, is removed from their environment.

The team tested fat-degrading enzymes, called lipases, from bacterial, fungal and guinea pig sources to see which would work best.

These lipases are able to work like molecular scissors, clipping off the fatty acids from the photosynthetic membranes.

They also worked to optimize the growth conditions of their green recovery method, testing variables such as the cell culture density of the microbes, light intensity and agitation of the cultures.

The team’s ingenuity rests in part with their ability to utilize the full repertoire of nature’s toolkit.

The project is also a prime example of the multidisciplinary, collaborative spirit of ASU research combining the expertise of bacteriologists, molecular biologists and engineers

Ultimately, the team hopes to achieve development of a new, economical and environmentally friendly, carbon neutral source of biofuels. 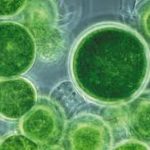