Japan scores a 3-0 win over South Korea in a warm-up game for World Cup qualifiers next month.

It was the first time in 37 years that Japan scored three goals against South Korea, and their first home win against them in 13 years.

Japan’s forward Shinji Kagawa who broke a metatarsal bone against South Korea at the Asian Cup in January, returned to international action by scoring 2 goals this time for their soccer match in Sapporo, northern Japan .

Japan’s players, unbeaten in 11 matches under Italian Alberto Zaccheroni and wearing black armbands,where they pay tribute to Naoki Matsuda, their colleague who died after collapsing in the training.

The Koreans had their best chance of a consolation goal in the 75th minute when midfielder Koo Ja-Cheol was set free in the area, but his shot went over the bar.

Both sides were using the game as a warm-up for the third round of Asian 2014 World Cup qualifiers which begin on September 2.

In the World Cup qualifying round, Japan will play North Korea, Uzbekistan and Syria in Group C, while South Korea will play Kuwait, United Arab Emirates and Lebanon in Group B. 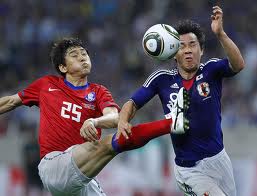