China’s relationship with Japan has not gone any better after both countries are at odds over a disputed uninhibited island, claimed by China as Diaoyu while Japan claimed it as Senkaku.

The uninhabited islands, which is believe to be rich in natural resources including gas, are not only claimed by China and Japan but of Taiwan as well.

China has recently been in stand off with the Philippines over the Scarborough Shoals west of the Philippines and within its 200 kilometer zone which also claimed the island by China to be historically theirs.

Despite warnings from China, around 150 people including eight parliamentarians, left Ishigaki, far southwest part of Japan bound for the undisputed island, a day after Japan deported pro-China activists who had sailed there from Hong Kong.

Japanese coastguards failed to stop the Chinese activists despite their huge air and sea operation.

Two coastguard vessels could be seen ‘pinning in’ the activists’ fishing boat. But some of the group still managed to swim ashore for the symbolic flag planting.

What the Japanese do next will signal whether this is a crisis which gets defused or has the potential to turn into something very serious. 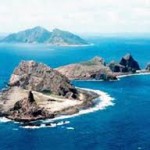