Apple peel has been found up to have six times source of antioxidants called flavanoids, than the flesh according to scientists.

The outer layer contains chemical ingredients that are good for the heart and can also combat potentially life threatening hypertension.

Researchers from Nova Scotia Agricultural College told the journal Food Chemistry, that the apple peel was effective in inhibiting angiotensin converting enzyme (ACE), an enzyme which is known to cause high blood pressure in humans.

The results also show that while all fruit has some level of flavanoids, few can compare with the effectiveness of the peel of an apple, the research says.

Moreover, the peel also has been found rich in ursolic acid, a compound that partially protects the mice in an experiment against obesity, based on a research by the University of Iowa (UI).

Interestingly, mice whose diet included ursolic acid actually ate more food than mice not getting the supplement, and there was no difference in activity between the two groups.

Despite this, the ursolic acid-treated mice gained less weight and their blood sugar level remained near normal.

Overall, the findings suggest that ursolic acid reduces obesity and its associated health problems by increasing the amount of muscle and brown fat, two tissues recognized for their calorie-burning properties. 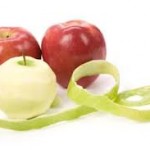