The Japanese government, sushi lovers and seafood traders at Tokyo’s massive Tsukiji fish market last Friday (March 19, 2010) cheered the defeat of a proposed ban on trade in Atlantic bluefin tuna, after a UN Wildlife meeting in Qatar voted down a proposal to ban the international trade of bluefin tuna caught in the Mediterranean and eastern Atlantic.

The ban proposal was initiated by Monaco and it was supported by the US and the European Union, but it was crushed by 68 who voted against the ban and only 20 who were in favor, with 30 abstentions at the meeting held last March 18, Thursday.

The European Commission has commented, that the trade ban’s rejection threatened the survival of the ocean predator while the environmental group Greenpeace also warned that the vote “sets the species on a pathway to extinction”.

Japan consumes three quarter of all bluefin tuna caught in the world’s oceans mainly raw as sushi and sashimi. A piece of “Otoro” or fatty underbelly now costs around $22 US dollars at high end Tokyo restaurants.

Decades of overfishing have seen stocks crashed more than two thirds in the Mediterranean, from where giant freezer ships have long headed for Japan.

Fish traders and chefs at Tokyo’s Tsukiji market, the worlds biggest, were heartened that they will be able to keep importing the species, which arrives snap frozen by the hundreds for daily predawn auctions.

Tuna traders at Tsukiji, the size more than 40 football fields, last week staged a protest against the proposed trade ban on the fish which has fetched as much $175,000 US dollars for a 232 Kg. (511 lbs.) specimen.

Japan had fought hard in Doha and elsewhere to block the proposed ban, arguing that the solution lies with enforcing existing quotas set by the International Commission for the Conservation of Atlantic Tunas (ICCAT).

Environmentalists, however complain that the lax enforcement by ICCAT has already driven Atlantic bluefin tuna close to extinction. 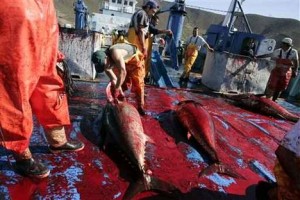