Iran denies Western allegations that it is seeking to develop nuclear weapons.

Its refusal to curb uranium enrichment work, which can have both military and civilian purposes, and stonewalling of the International Atomic Energy Agency’s investigation have raised concerns.

Tensions have soared in recent months, with the US and European Union adopting oil sanctions and Tehran threatening retaliation by closing the Strait of Hormuz, the main Gulf oil shipping lane.

But the US and European Union expressed cautious optimism over prospects that Iran may be willing to engage major powers in new talks. They stressed that any resumed negotiations must be sustained and focus on the nuclear issue.

US Secretary of State Hillary Clinton and European Union foreign policy chief Catherine Ashton said Iran’s letter address to Ashton on behalf of the US, Britain, France, Russia, China and Germany might mark a step forward.

Ashton, who handles contact with Iran proposed resuming the talks and said Tehran would have ‘new initiatives’ to bring to the table.

The International Atomic Energy Agency (IAEA) wants Iran to explain intelligence findings detailed in an IAEA report in November about research and development pointing to a nuclear weapons agenda, and grant access to sites, documents and people relevant to the inquiry.

Iran has indicated readiness for the first time in three years to address the agency’s questions but also repeatedly dismissed the allegations as baseless and forged, doing little to counter skepticism about its nuclear intentions.

Western capitals suspect Iran is trying to buy time by offering ‘talks about talks’ while it accumulates higher-enriched uranium in a mountain bunker that may be largely invulnerable to air strikes, mooted by the US and Israel as a last resort if diplomacy and sanctions fail.

The Islamic Republic says it is refining uranium for civilian energy and for a medical research reactor, not bombs.

But UN nuclear inspectors headed to Iran yesterday for talks aimed at getting Tehran to start addressing their mounting concerns that it may be seeking to develop atomic bombs. 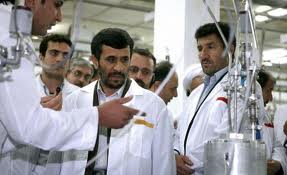