They are now three left competing at the American Idol and Jessica Sanchez has been a consistently strong contender throughout the show, but tonight Jessica Sanchez received the highest form of praise.

Her performance of Mariah Carey’s My All, chosen by the judging panel and her choice of an Aerosmith song, ‘I don’t want to miss a thing’, Jessica took that huge risk singing the song in front of the band’s frontman and Idol’s judge Steven Tyler.

Fortunately, the move paid off and Steven said, ‘You just took a great song and made it greater. Beautiful.’

As the final three contestants battled it out for a ticket to next week’s final, Phillip and Jessica are competing against Joshua Ledet.

Joshua the strong contender has been consistently delivered throughout the competition.

But hot on Jessica’s heels was Phillip Phillips, who shocked everyone with a show stopping performance of Bob Seger’s ‘We’ve Got Tonight’ that closed the show.

Randy told the hopeful, ‘That was the perfect song at the perfect time and your best performance on the show ever.

This boy right here is in it to win it and he’s ready.’

His fellow judges agreed, and Jennifer said it was like a ‘lullaby’ while Steven reinforced that he had ‘nailed it’, and all three awarded the 21-year-old with a standing ovation.

As usual, Joshua Ledet was consistently impressive in the judges’ eyes, with his first performance of Etta James track I’d Rather Go Blind receiving a standing ovation.

Coming out fighting, Phillip misfired with his own-choice song but made up for it and then some with his rendition of Bob Seger’s We’ve Got Tonight.

Delivering the goods, Joshua’s songs were all praised, and he gave a fittingly dramatic performance of Mary J. Blige’s No More Drama.

Steven told the aspiring star, ‘Out of 70,000, there’s only one American Idol. And you sang like that one tonight.’

It wasn’t all smooth sailing for Jessica, who was simply told her rendition of Jackson 5’s I’ll be there was ‘good’, while Randy said: ‘I liked it OK, I didn’t love it.’

The trio of contestants performed songs chosen by mentor Jimmy Iovine for their last performances of the evening. 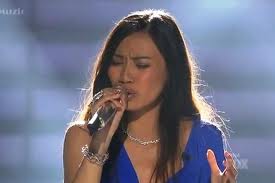