England’s Justin Rose wins the WGC-Cadillac Championship at Doral, in Florida. The USPGA Tour win in Florida was Rose’s fourth in the US soil.

Rose’s victory matches Tony Jacklin and Luke Donald’s four wins on American soil. Nick Faldo, with nine titles, is the only Englishman who can boast more successes in the United States.

But, with Watson fading, world number one Rory McIlroy’s late charge falling short and Tiger Woods retiring with an Achilles injury , a final round two-under 70 of Rose was enough to win by a shot from Watson.

McIlroy, officially the world’s best player after winning the Honda Classic, put himself in contention for a second successive victory but had to settle in the end for a five-under 67.

Rose’s fellow Englishman Luke Donald finished on 12-under in a tie for sixth – his first top 10 finish of the year. 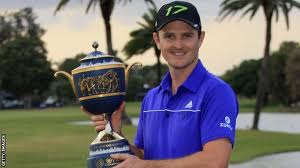