Toddlers who watch too much TV risk adding inches to their waistlines and athletic ability by the time they turn ten, claim scientists.

The study tracked the TV habits of 1,314 children in a BioMed Central journal.

The two year olds monitored in the study watched an average of 8.8 hours per week, rising to 14.8 hours by the time they were four year olds.

Some 15 per cent of the 1,314 children analyzed were already watching over 18 hours of TV a week, the University of Montreal researchers found.

The study noted that every extra weekly hour watched could add half a millimeter to their waist circumference and reduce muscle fitness.

The researchers also carried out a standing long jump test to measure each child’s muscular fitness and athletic ability.

An extra weekly hour of TV can decrease the distance a child is able to jump from standing by 0.36 cm, the study said.

It is hoped that the study, published in the International Journal of Behavioral Nutrition and Physical Activity, will encourage authorities to target the factors behind childhood obesity.

The American Academy of Pediatrics recommends that children aged over two should not watch more than two hours of television per day.

According to Dr. Linda Pagani, study co-author from the University of Montreal, ‘across the Western world, there have been dramatic increases in unhealthy weight for both children and adults in recent decades.

‘Watching more television not only displaces other forms of educational and active leisurely pursuits but also places them at risk of learning inaccurate information about proper eating.’

Researcher Dr. Caroline Fitzpatrick said: ‘The pursuit of sports by children depends in part on their perceived athletic competence. ‘Accordingly, the ability to perform well during childhood may promote participation in sporting activities in adulthood.’

According to the study, habitual practices and behavioral dispositions became entrenched during childhood and these habits might affect their attitudes and preferences to sporting activities in adulthood.

According to Dr. Pagani, the study served as a warning about the factors which could lead to childhood obesity.

‘The bottom line is that watching too much television, beyond the recommended amounts, is not good,’ Dr Pagani said. 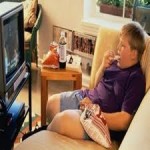