Serena Williams trounced the no. 26 seed Maria Kirilenko 6-3, 6-2 at Wimbledon.

The defending champion has no intention of surrendering her Wimbledon crown.
After hitting 10 aces and compiling a 32-9 edge in winners against Kirilenko, Williams termed the showing her “best I’ve played since I came back.”

The American tennis star had come into her 12th Wimbledon on the back of an 11-month injury lay-off caused by a foot injury followed by life-threatening blood clots on her lungs.

The seventh seed will be trying to become the first woman since Steffi Graf in 1991-93 to win three consecutive Wimbledon titles.

Williams, the four-time winner, will face France’s Marion Bartoli, the 2007 runner-up, for a place in the quarter-finals.

She was part of a parade of past champions who breezed into the fourth round Saturday, joined by Maria Sharapova, top-seeded Caroline Wozniacki, seeking her first Grand Slam title.

Other fourth-round women’s matches include Williams’ older sister Venus against No. 32 Tsvetana Pironkova, who upset the five-time Wimbledon champion a year ago; Wozniacki against No. 24 Dominika Cibulkova; and Sharapova against No. 20 Peng Shuai. 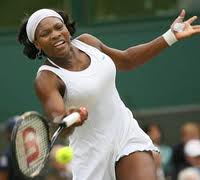