The Englishman fired a 69 in the final round to win the tournament by three shots and give himself a fighting chance of reclaiming the world number one spot.

Westwood, currently ranked number two, led by five going into the last round at the Royale Jakarta Golf Club and held off a final-day charge from Thailand’s Thongchai Jaidee, who shot a flawless 65 to finish in second place.

Westwood’s countryman and Ryder Cup team-mate Luke Donald, currently world number three will leapfrog Westwood and current number one Martin Kaymer, of Germany, if he triumphs at the Heritage tournament on the US PGA tour.

Donald holds a one-shot lead going into the final round at the Heritage tournament in South Carolina. 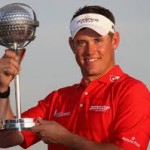